What do you call a drummer that breaks up with his girlfriend?
Homeless. 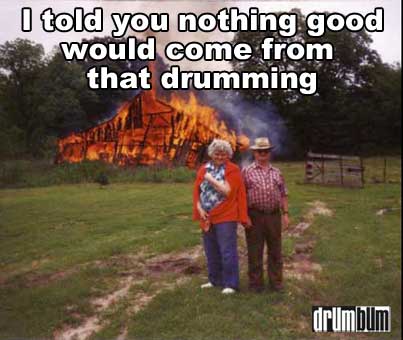 How can you tell a drummer’s at the door?
The knocking speeds up.

How can you tell when a drummer’s at the door?
He doesn’t know when to come in

What’s the last thing a drummer says in a band?
“Hey guys, why don’t we try one of my songs?

What do Ginger Baker and black coffee have in common?
They both suck without Cream.

How many drummers does it take to change a lightbulb?
Five: One to screw the bulb in, and four to talk about how much better Neil Peart coulda done it.

How many drummers does it take to change a light bulb?
None, they have a machine to do that now.

How can you tell when the drum riser is level?
Drool comes out of both sides of the drummer’s mouth.

Why didn’t the little drummer boy get into heaven?
Because he woke the baby for Christ’s sake!

What do you call a Drummer in a Volkswagen?
Farfromthinken.

What do you call a drummer with half a brain?
Gifted.

What does a drummer use for contraception?
His personality.

What’s the best way to confuse a drummer?
Put a sheet of music in front of him.

“Hey buddy, how late does the band play?”
“Oh, about a half beat behind the drummer.”

Why is a drum machine better than a drummer?
Because it can keep good time and won’t sleep with your girlfriend. 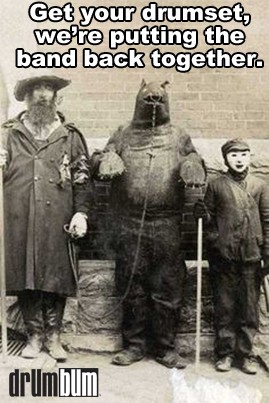 How can you make a drummer’s car more aerodynamic?
Take the Pizza sign off of it.

What’s the biggest lie told to a drummer?
Hang on a minute and I’ll help you with your gear.

• If thine enemy wrong thee, buy each of his children a drum. – Ancient Proverb

• Overheard: “Will the musicians please come to the stage. Oh, and the drummer too.”

What does a drummer use for contraception?
His personality.

What’s the best way to confuse a drummer?
Put a sheet of music in front of him.

“Hey buddy, how late does the band play?”
“Oh, about a half beat behind the drummer.”

Why is a drum machine better than a drummer?
Because it can keep good time and won’t sleep with your girlfriend.

Hey, did you hear about the drummer who finished high school?
Me either.

How do you get a drummer to play quieter?
Put a chart in front of him

Why do guitarists put drumsticks on the dash of their car?
So they can park in the handicapped spot.

What do you call someone who hangs around with musicians?
A drummer.

How can you tell when a drummer’s at the door?
The knocking speeds up.

How is a drum solo like a sneeze?
You can tell it’s coming, but you can’t do anything about it.

What does the average drummer get on an IQ test?
Drool.

What do you call a drummer that breaks up with his girlfriend?
Homeless.

What’s the last thing the band wants to hear the drummer say?
“Hey guys, wanna try one of my songs?”

What’s the first thing a drummer says when he moves to LA?
“Would you like fries with that sir?”

Why do bands have bass players?
To translate for the drummer.

How can you tell a drummer is walking behind you?
You can hear his knuckles dragging on the ground.

I once asked a drummer how to spell “Mississippi”.
He said, “the river or the state?”

How do guitar players get away with parking in the handicap spots?
They put drumsticks on the dash.

What do you call a dozen drummers at the bottom of the sea?
A good start!

Did you hear about the drummer who got accepted to Yale?
Neither did I.

Why are drummers always losing their watches?
Everyone knows they have trouble keeping time.

What do you call a kid with a set of drums?
The poster child for Birth Control.

What do you call a kid with a set of drums?
The poster child for Birth Control.

What do you call a bunch of kids with drums?
Jerry’s Kids.

What would you call the smartest drummer in the world?
Mildly retarded.

What do you call 10 guys in a drum circle?
A dope ring.

What is the difference between a drummer and a savings bond?
One will mature and make money.

Did you hear about the drummer who finished high school?
Me neither.

What do you call a beautiful woman on a drummer’s arm?
A tatoo.

What’s the difference between a large pizza and a drummer?
The pizza can feed a family of four.

What’s the difference between a high school drumline and shoes in a dryer?
Nothing

What do you do if you accidentally run over a drummer?
Back up.

What do you call a drummer with half a brain?
Overqualified.

What is the difference between a bad drummer and a vacuum cleaner?
You have to plug one of them in before it sucks.

What did the drummer say to the band leader?
Do you want me to play too fast or too slow?

• An amateur drummer died and went to heaven. He was waiting outside the pearly gates when he heard the most incredible fast and furious drumming coming from within. Immediately he recognized the playing and rushed to ask St. Peter if that was Buddy Rich playing drums inside the gates. St. Peter responded: “No, that’s God. He just thinks he’s Buddy Rich.”

• A guy wanted to play bass in a band. The band told him, “Okay, but you will have to have 1/3 of your brain removed.” So the guy went into surgery. When he woke up, the doctor said, “I’m terribly sorry, but we made a mistake and accidentally removed 3/4’s of your brain instead. You’re now a drummer”.

• A man goes to a pacific island for vacation. As the boat nears, he notices the constant sound of drumming. As he gets off the boat, he asks a native how long the drumming will go on. The native casts about nervously and says “very bad when drumming stops.”
Later that day, the drumming is still going and it is really starting to get to him. So, he asks another native when the drumming will stop. The native looks as if he’s just been spooked. “Very bad when drumming stops,” he says, and hurries off.

After a couple of days with little sleep, the man had had enough. He grabbed the first native he saw, slammed him up against a tree, and shouted, “What happens when the drumming stops?!”

• A New York drummer by the name of Joe was out of work and desperately searching for a gig. He went to the union office where they told him about plentiful jobs in Greece. “Greece?, the drummer said. The union representative replied, “Hey, do you want to work or don’t you?”.

So the man packed his bags and headed off to Greece. He was to meet up with an old guy by the name of Tarek at a small pub near the town of Perin. Upon his arrival, he located the pub but Tarek was nowhere to be found.

He tracked Tarek down later by phone. He said he needed him for a last minute wedding gig tonight at the Oasis hotel. There would be over 400 guests but unfortunately there wouldn’t be time for a rehearsal. Tarek said, “Just show up with your drums and be ready to play.” Well, the NY drummer wasn’t that nervous. He he had played hundreds of wedding gigs back in New York and he was just happy to have some work.

Joe arrived at the hotel on time. The whole band was there except the band leader, Tarek. He set up his drums and patiently awaited for the old guy. Tarek finally arrived 5 minutes before they were supposed to go on. He frantically set up his music stand and raised his arm to lead the band. “Wait!, shouted the NY drummer, what are we playing?” Tarek looked at him calmly (knowing he was a professional drummer) and stated, “Just relax and give me strong backbeats on 7 and 13.”

• St. Peter was checking ID’s at the pearly gates. He asks the first man, “What did you do on Earth?” The man replied, “I was a doctor.” St. Peter says, “OK, go right through those two shiny gates to your left.

“Next person! What did you do on Earth?” , “I was a school teacher.”
“OK, ..through those two gates and to the left

.”Next! ..And what did you do on Earth?” . “Oh, I was a musician.”
“All right, go around to the back door, up the freight elevator, through the kitchen and…”

• A customer walks into the brand new store downtown that sells brains. There are three glass cases, each containing a nice wet quivering gray brain. The first one says “SCIENTIST”, and it costs $100. The second says “ELECTRICIAN” and costs $1000. The third says “DRUMMER” and costs $10,000. The customer is confused, and questions the salesperson.
“I don’t get it…why would I want a drummer’s brain for $10,000 when I can get an scientist’s brain for $100?”.

The salesman replied, “Because, it’s never been used.”

• A horn player who had been playing with Buddy Rich for many years came back from vacation to hear a rumor that Buddy had died. He didn’t quite believe it, so he phoned Buddy’s wife and said “Can I speak to Buddy please?”

A couple of hours later, he called her again. “Is Buddy there please?”

“No, I’m sorry. Buddy’s no longer with us,” said Buddy’s wife. And hung up the phone.

Ten minutes later, he called Buddy’s wife again. “Can I speak to Buddy please?” he said.

She recognized his voice, and said: “Look, I’ve told you before, BUDDY’S DEAD!” And slammed down the phone.

The horn player replied, ..”I just love hearing you say it.”

The drummer with bad time of course. The other three don’t exist.

• A drummer, tired of being ridiculed by his peers, decides to learn how to play some “real” musical instruments. He goes to a music store, walks in, approaches the store clerk, and says “I’ll take that red trumpet over there and that accordion.”
The store clerk looks at him a bit funny, and replies “OK, you can have the fire extinguisher but the radiator’s got to stay”

• A young drummer girl was walking along the street when she heard..
“Psst! Down here!”

She looked down and saw a frog sitting by the curb. The frog says to her, “Hey, if you kiss me I’ll turn into a world famous drummer and make you rich and famous!” She thought for a moment and reached down, grabbed the frog and stuffed it in her pocket.

A woman standing nearby witnessing the whole event said, “What did you do that for?”

The girl replied, “I’m not stupid. I know a talking frog is worth heaps more than a famous drummer any day!”

• Two cowboys were waiting in their bunkers for the Indians to attack. They listened to the distant pounding war drums.
One cowboy muttered to the other, “I don’t like the sound of them drums.”
Just then, an Indian voice came over the hill, “It’s not our usual drummer!”