About the President of Drum Bum

Hello everyone. I’m a career professional in the world of drumming. I’ve played in hundreds of bands through the years including some famous names such as Lee Greenwood, Faith Hill, John Berry and others. I am the proprietor of the popular website, DrumBum.com  as well as related drumming sites like Drumming.com and DrumChat.com. My life philosophy centers around the Golden Rule and I’m proud to run my company and personal life as best as I can according to this principle.

The Story
I’ve been playing drums for over 40 years. I started in 1975 when I was 13 years old. My father was a steel guitar player and I played in several country bands with him before eventually moving on to rock, R&B, and jazz.

Through the years, the natural progression of wanting to be versatile and competitive eventually led me to a world famous school in Hollywood, CA by the name of Musician’s Institute (P.I.T.). It was there that I received an honors degree in percussion performance. 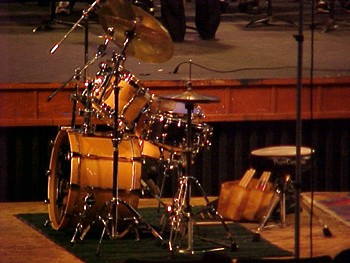 From 1987 to 1993 I played in local rock groups, BS&M and Sketch as well as numerous jazz groups such as the Skip Gailes Quartet, Frens, and a fusion band by the name of Secrets that made quite a name for itself on the east coast. Many name players filtered through Secrets including Steve Wilson, Carter Beauford, Keith Horne and Tim Reynolds. The next couple of years were eventful as we played esteemed jazz venues and opened for such acts as Stanley Jordan, and The Yellowjackets.

In 1992 I moved to Nashville to pursue a major artist gig. I landed the drum chair with legend, Lee Greenwood (“I’m proud to be an American”) as well as subbing for other major artists like Faith Hill and John Berry among others. I experienced playing major arenas, political conventions, Las Vegas, and numerous TV shows within that time. I even played the Ryman Auditorium and the Grand Ole Opry. It was all a dream come true.

In 1996, I decided to move back home to start a family. I opened Drum Bum in 1999 and built a network of drumming sites and gift sites over the next 23 years. We even built an online mall back in the day and had hundreds of vendors. In addition to the above, I buy and sell domain names and teach other businesses online marketing under the name of RVA Marketing. I continue to play drums when time permits and build new business ventures.