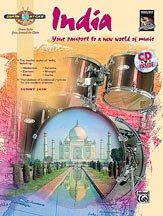 Drum Atlas: India Book / CD – The music of India is a rich source of rhythmic theory and tradition that remains largely untapped by modern drummers. Drum Atlas: India explains how the traditional rhythms of instruments such as the tabla, mridangam, and dhol can be adapted to the modern drumset. YouÆll start by learning the bol, or spoken syllables that Indian percussionists have used for centuries to communicate drum patterns. Then, youÆll learn the theory behind tal, rhythmic cycles of various numbers of beats. Indian rhythms are often composed of familiar patterns with 3, 4, 6, 8, or 16 beats, but sometimes delve into patterns of 5 or 7 beats that may seem unusual to a Western drummer. Mastering this knowledge will improve your soloing, linear phrasing, and subdividing skills. YouÆll also learn how you can incorporate Indian rhythmic concepts into other musical styles, such as rock, funk, and jazz. Softcover Book.

I’D RATHER BE PLAYING MY DRUMS! Sticker