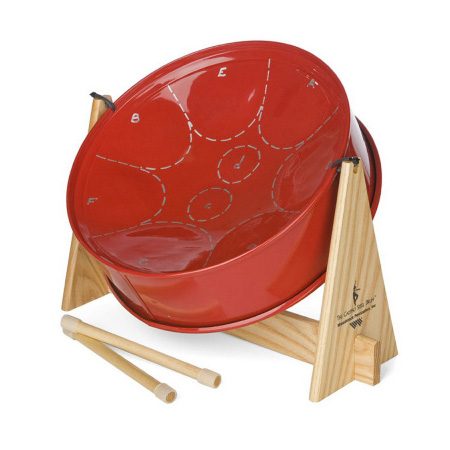 Steel Drums / Pan Drum – BEST PRICE! Get them one of these unique, mini steel drums and they can expand their musical repertoire! A steel drum (or pan drum), can produce a wide range of notes, allowing you to play a variety of musical sounds. Popular in Latin and calypso music. This quality, mini steel drum comes with a pair of rubber-tipped mallets, wooden stand, and song book. Perfect for kids or adults.  Made in Trinidad where pan drums are quite popular. Approx. 10″ in diameter.

Pan drums or ‘steel drums’ as they’re most often called, were created in the Caribbean Islands on the tropical island of Trinidad. Like many drums of Latin America, Caribbean drums were also influenced by African culture and it is believed they were invented there. As slaves were brought to the islands, so was their knowledge of building these special drums.  Pans / steel drums were constructed of old metal containers and hammered to obtain certain pitches to create melodic sounds. Our steel drum is a miniature, gift type version of those pan drums of the past.