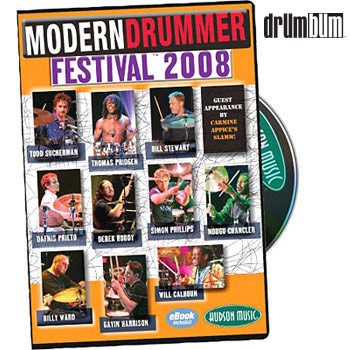 Modern Drummer Festival 2008 DVD *CLEARANCE! – Own a piece of drumming history! This DVD features amazing performances and illuminating interviews from eleven of today’s greatest drum artists, the 2008 Modern Drummer Festival™ is much more than merely the highlights of the most prestigious, longest-running, largest live drumming event in the world. The deluxe Modern Drummer Festival 2008 DVD package is also an incredible educational resource that provides in-depth insights and exclusive instruction (including a printable, 28-page eBook) from one of the most musical and musically diverse groups of drummers in the Festival’s 20-year history.

Two full Interview DVDs are an integral part of the complete Modern Drummer 08 package that allow the artists to augment their on-stage performances with back-stage explanations and demonstrations of their concepts, backgrounds, influences, techniques, interpretations and compositions. Included are inspiring conversations with each drummer as well as unprecedented drummer-to-drummer interviews, such as Simon Phillips-Gavin Harrison, Ndugu Chancler-Will Calhoun and Todd Sucherman-Derek Roddy, plus on-screen graphics that link the lessons to specific PDF files with notated patterns and exercises in the eBook. Whether viewed before or after the performance discs, the interviews bring higher levels of education and value to the entertainment and excitement of the program.

Of course, Modern Drummer 2008 DVD also contains extensive, multi-camera coverage of the spectacular drumming that has made the Modern Drummer Festival a must-see event for drummers around the world. While some players offer solo performances, others play with pre-recorded tracks or live bands during their Festival segments, including: